I had the honour and privilege of working with Canucks P.A. announcer John Ashbridge here in Merritt during Saturday’s game between the Vancouver Canucks Alumni and the Society of BC Conservation Officers.

Cents coach and GM Luke Pierce acquitted himself quite well for the Conservation Officers, notching an assist in an 8-5 loss. Former Cents assistant coach and current coach of the Merritt Midgets Joe Quewezance also looked good, wearing number 89. Both Luke and Joe actually played defence most of the game although it’s hard to say anyone really “played” defence.

Here’s the summary John Ashbridge did for the Canucks Alumni website:

The local boy came home to collect three points on the night, as the Vancouver Canuck Alumni collected the “W”, defeating the B.C. Conservation Officers province-wide squad, 8-5 in Merritt last Saturday night (March 12th), capping off another undefeated season for the veteran squad.

Mike Brown, who grew up in the Nicola Valley and played his junior hockey with the Merritt Centennials, scored once and set up two more in a close contest with the well-trained Conservation crew before a crowd of several hundred at The Nicola Valley Memorial Arena. It’s the third time in five years these two teams have met, with the Alumni taking both prior encounters, in 100 Mile House and Smithers. It’s more than just a game for the Conservation officers; it’s a chance for them to draw a team from among hockey-playing members serving in all corners of the province, some of them seeing their professional colleagues face-to-face for one of the rare times each year. And they’ve always iced a solid team and put on a good show, something for which the Alumni – and the fans – are truly grateful.

For this contest, the opponents were bolstered by Merritt hockey stalwarts Joe Quewezance and the coach of the Centennials, Luke “The Legend” Pierce. They even held a get-together practice the day before the game … alas, to no avail. Backstopped mainly by Ken “Beach Ball” Owens in net, the CO’s kept the score close until the third period when the hosts found they simply didn’t have the legs for the final 20 minutes and the Alumni pulled away from a 3-3 tie to collect the two points.

Alumnus Dusty Imoo outskated almost everyone as he netted one and helped on two more while B.J. MacDonald, working as Brownie’s winger, also scored once and set up a pair. For the second game in a row, veteran d-man Doug Bodger was in the lineup, joined by fellow Islander Gary “Bones” Bromley. And, true to form, Wayne Van Dorp claimed victory at the pre-game buffet, downing two (2) plates of lasagna before embarking on his usual pre-game whine about the lack of dessert choices.

There was a lot of BCHL representation in the Canucks line-up. Here’s who played in the green and blue: 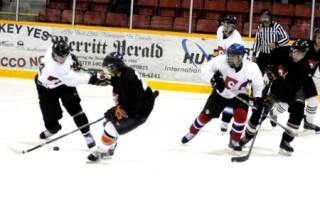 Meanwhile, the Centennials have extended the deadline for registration for their Spring Evaluation Camp here in Merritt. Here’s the release from their website:

The Merritt Centennials announced today that the deadline for registration for their 2011 Spring Evaluation Camp in Merritt on April 1-3 has been extended from March 15th to March 31st. Sign-in is from 3 p.m. to 4 p.m. on Friday, April 1, 2011 at the Nicola Valley Memorial Arena.

“We’ve had a great response from some very good players for the Camp so far,” said Cents Head Coach and GM Luke Pierce. “But we decided to extend the deadline because didn’t want to exclude any prospective players who were unable, for whatever reason, to register before March 15th.”