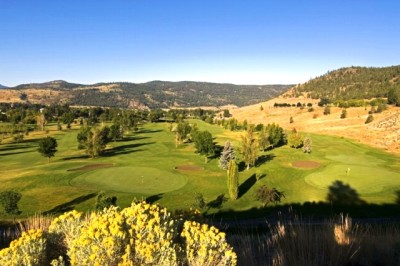 (Merritt Golf & Country Club)
With Alex Grebenyuk moving on to the Vancouver Giants, the Centennials are without a blogger right now (and who’s to say that the person that Q101 hires will even do a blog) so I thought I’d post the news coming out of Merritt here, since this blog used to be the home of it as “Making Cents”.
I had the chance to take part in the Cents first charity golf tournament on Friday at the Merritt Golf & Country Club and although the highlight of my day personally was sinking a birdie putt, the main highlight is the amount of money raised for Ronald McDonald House BC.
Next year’s tourney should be bigger and better!
Here’s the release regarding this year’s:
FOR IMMEDIATE RELEASE


On Friday, July 13th, the Merritt Centennials hosted their first annual Charity Golf Tournament. The event was a huge success as $1500 was raised for Ronald McDonald House BC.

Golfers enjoyed the beautiful, sunny day spent at the Merritt Golf & Country Club. When taking a break from the scenery, the golfers were competing in the putting, longest drive, “score on the hockey net”, and hole in one challenges, followed by dinner and silent and live auctions.

A number of current and former Centennials were in attendance. Among the current players were Brendan Lamont, Tyler Steel, Payton Schaefer, Brent Fletcher and Sebastien Pare. Among the alumni were Kevin Rabbitt, Paul Barnes, Rich Brew, Todd Fletcher, Pat Rabbitt, Bobby Vermette, Rob Boyd and our current GM & Head Coach Luke Pierce – who played for the Cents from 2001-03.

“This was another great show of support from the community.” said Heather Poole, one of the organizers of the tournament. “We all had a great time over the course of the day and are already looking forward to next year’s event!”

“It was a great time putting it together,” added another one of the organizers, Shane Sanderson. “We really couldn’t have done it without our amazing sponsors and with almost 70 participants, the response was fantastic.”

“To help such a great cause like Ronald McDonald House BC really means a lot,” said Liz Brackenreed, who also helped with organizing the tournament. “We know there are families from our community who have had to use RMHBC while their children are at BC Children’s Hospital in Vancouver and to make a difference like this is really special.”

Ronald McDonald House British Columbia is a nurturing and magical home-away-from-home for sick children and their families where, together, their lives are enhanced through unconditional support, encouragement, friendship and love.

The Merritt Centennials, proudly celebrating 40 seasons as the BCHL’s longest continuously run franchise, are a non-profit, community owned Junior ‘A’ Hockey Club run by a dedicated team of investors, directors, and volunteers.